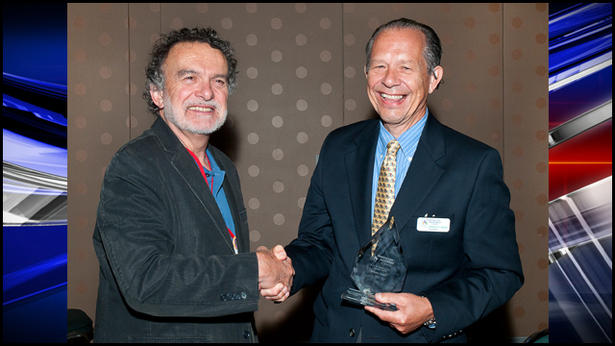 Sarasota, Florida — The Hearing Loss Association of Sarasota (HLAS) was awarded the first annual “National Get in the Hearing Loop” award for its advocacy work in getting the revolutionary loop system accepted by so many local venues in the past year.

The honor was presented by the Hearing Loss Association of America’s (HLAA) at its’ annual convention in Providence, Rhode Island last week.

Peter Fackler, the HLAA’s President, Board of Trustees, praised the Sarasota chapter for its accomplishments, including:

“Our goal is to make Sarasota, Venice and Bradenton among America’s first hearing-friendly cities” said Ed Ogiba, President of the Sarasota Chapter, who accepted the award on behalf of the chapter in release. “This remarkable system will not only bring many of the local 110,000 people with hearing loss back to theatre and community activities, it is also a proven vehicle to build businesses.”

HLAS, a non-profit organization, is the local chapter of the Hearing Loss Association of America (HLAA). HLAS helps people with hearing loss through education, mentoring, advocacy and community support. HLAS has monthly meetings, which feature expert speakers and are open to  everyone in the community seeking ways to deal with hearing loss. For more information, call 941-706-4312 or visit www.hlas.org.

(from sarasotabeaches.wtsp.com, by Meilin Tompkins)